In 1880 a new directory for Plymouth appeared with Eyre´s imprint: Eyre Brothers’ Post Office Plymouth District Directory, embracing Plymouth, Devonport, Stonehouse, and the District Five Miles Round 1880-81 (Fig. 16.).[i] This was not the first directory of Plymouth but it was the only one which survived more than four issues and, after 1895, was published annually. The Introduction to this First Edition, dated September 1880, apologises to the residents of the so-called Three Towns, i.e., Plymouth, Devonport and Stonehouse, for a two-month delay in publication and hopes for increased support of their inhabitants on future biennial occasions. The directory was published by the Eyre Brothers again in 1882-83 (2nd) and 1885-86 (3rd) suggesting they found it difficult to keep to their projected timetable. From the 2nd Edition the title became Plymouth and Devonport.

There were 16 editions of the Post Office Directory attributed directly to Eyre (with slight change of name) until 1904.[ii] However, only the first three editions were actually published by the Eyre Brothers themselves: the 4th and 5th editions were published by W H Hood; the 6th to 11th by J G Hammond who published it annually from 1895; and later editions (the 12th to 16th) by Theophilus Creber. All these later publishers issued the work as Eyre’s Post Office Directory. The Directory was taken over by A H Swiss from 1905 and continued until c.1932, but now with the Eyre name is relegated to the subsidiary title.[iii] 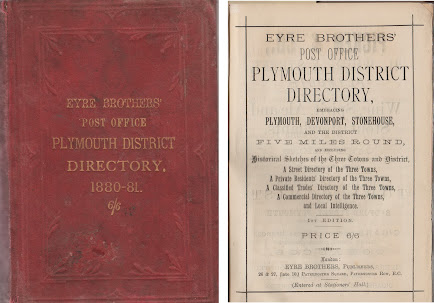 The directory was an impressive publication with over 750 pages. Mistakes in pagination indicate the rush to get the work distributed to subscribers[iv]. There is a separate Street Directory, Private Residents Directory and Commercial Directory. The classified Trades and Professions Directory runs to 100 pages and the list of Booksellers (p. 598) lists some 35 businesses including W Brendon & Son and Wm Trythall who had both previously published directories and Alfred H Swiss who would take over the Eyre´s publication in 1905. Also listed are the agents for Eyre´s directory: Bazley & Co., 52 Bedford St., Plymouth; Clarke & Son, 43 Fore St., sole Devonport agent; and William Henry Walker, 28 Bedford St., Plymouth.

Although not called for on the title page, the directory even included a map of the county and the inclusion of a map became something of a tradition. Only this first edition of the directory (i.e., 1880-81) has a map of Devon, and this was a Philips Handy Atlas map with the Eyre title noted above.[v] Subsequent copies until approx. 1900, however, all included a map of the immediate Plymouth district and all executed by local companies.

A map by Maddock (1882-83) and then two plans by Brendon & Son were used in 1885-86 and 1888-89 respectively. Post-1890 Eyre directories used a map lithographed by John Smith of Plymouth with the Eyre imprint first appearing directly on his map c.1896. Theophilus Creber seems to have had a map specially commissioned: Theophilus Creber’s Copyright Plan of Plymouth, Devonport, Stonehouse and Neighbourhood.[vi]

In the first edition of the directory one full-page advert announces a new edition of the Hotels, others offer the French Directory and the second edition of Watering and Visiting Places. However, the second edition of the directory (1882-83) gives a better indication of the scope of the Eyre Brothers output. Two full page adverts list their publications; apart from the works already noted here, the two directories of Cardiff and of Swansea are noted; Dr Abbott´s Sea Bathing Guide; and a “Devon & Cornwall Guide” (Fig. 17.).  Although the Eyre Brothers were careful to use the full names of the south and north volumes in this advert, this latter reference could refer to Eyre’s Guide to the Seaside and Visiting Resorts of Devon & Cornwall noted above. No copy of Dr Abbott´s work has so far been traced even though it was in its 12th edition (price 6d) when advertised in the 2nd edition of the Plymouth directory of 1882.

One attempt at keeping customer loyalty is worth a mention. At the beginning of the second edition an Important Notice dated August 1882 promises that One Shilling will be allowed to Subscribers to the 1884 edition of our [directory] who return their copy for 1882 in a complete condition when they receive the new book. This ploy does not seem to have been successful, however, and after only 3 issues the brothers handed over the reins to another London company. 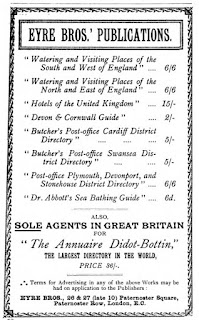 Return to Introduction and Contents

[ii] Plymouth Central Library have a complete set of copies from the 1st to 16th editions, but most have lost their map.

[iv] For example, page 527 (Commercial Directory last page), has page number 584 on the reverse. Page 585 is the first page of the Classified Trades Directory which continues this pagination.

[v] As mentioned, the Philips map folded neatly once: the size of the first directories is 125 x 190 mm. The directory size had increased somewhat to 140 x 220 mm by the 5th Edition.

[vi] Four copies are known although only two (CUL and Bod) have been retained in the directory (loose copies at WDRO & DevA). 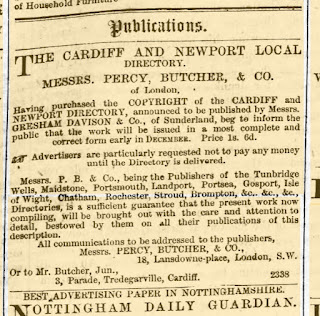 3. George Pallant Butcher 3.1 Before the Eyre Brothers: The years 1872-1880/81 We may not know who the Eyre Brothers actually were but there is now sufficient evidence to conclude that the name was not Eyre and there were not even any brothers [i] . There are no works before 1876 and once the Eyre Brothers cease publishing the Plymouth directory the trail goes cold. However, in some publications we have seen lists of works published which include the names Dr Abbott or Butcher. Dr Abbott seems to be a spectre: apart from two adverts his name never appears again. Not, however, the name Butcher. Indications are that George Pallant Butcher was trading himself as Eyre Brothers at least up until 1886. On January 11th 1887 a bankruptcy notice was listed in the London Gazette .   George Pallant Butcher (trading as Eyre Brothers), 26 and 27 Paternoster Square, Paternoster Row, London, residing at 6 Flaxman Road, Denmark Hill, Surrey, publisher. Obviously, this now provides a clear link to the
Read more
April 29, 2022 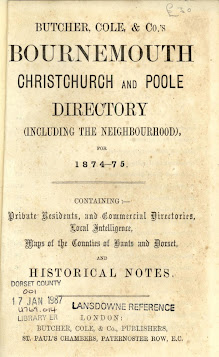